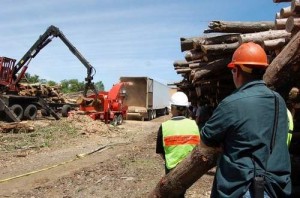 ReEnergy Holdings recruited more than a dozen suppliers for its new biomass power plant in Lyons Falls, NY as more than 100 people attended Demo Day July 25 to watch wood chippers and learn about a new program offered to those in the logging industry.

By midday, 13 loggers had signed up for the program, in which ReEnergy will purchase state-of-the-art chippers and enter into a five-year contract with participating loggers. The loggers will make long-term commitments to sell their biomass fuel to ReEnergy, paying for the chippers over the course of their contract via the biomass material they bring to ReEnergy. The company expected the number of participants to double.

“I’ve been in this business for 30 years. I’ve never had any company offer me the deal ReEnergy has,” Ronald G. King Jr. said shortly after deciding to join the program. His new chipper will allow him to expand and diversity his business.

He’ll be able to add to his company, which now subcontracts with a sawmill. While part of his crew will continue to cut for the sawmill, others can focus on the material they traditionally have left behind. He owns 2,000 acres in Barnes Corners where he’s left tops, limbs, and small, diseased or dead trees. That material now is usable and will help make the payments on his new equipment.

ReEnergy’s chief commercial officer, Thomas E. Beck, said, “About 25 to 30% of wood is traditionally left in the woods.” By using the normally wasted material, not only can loggers increase their profits and hire more workers, but also, according to Beck, “It’s very important for regeneration and an important part of forest management.”